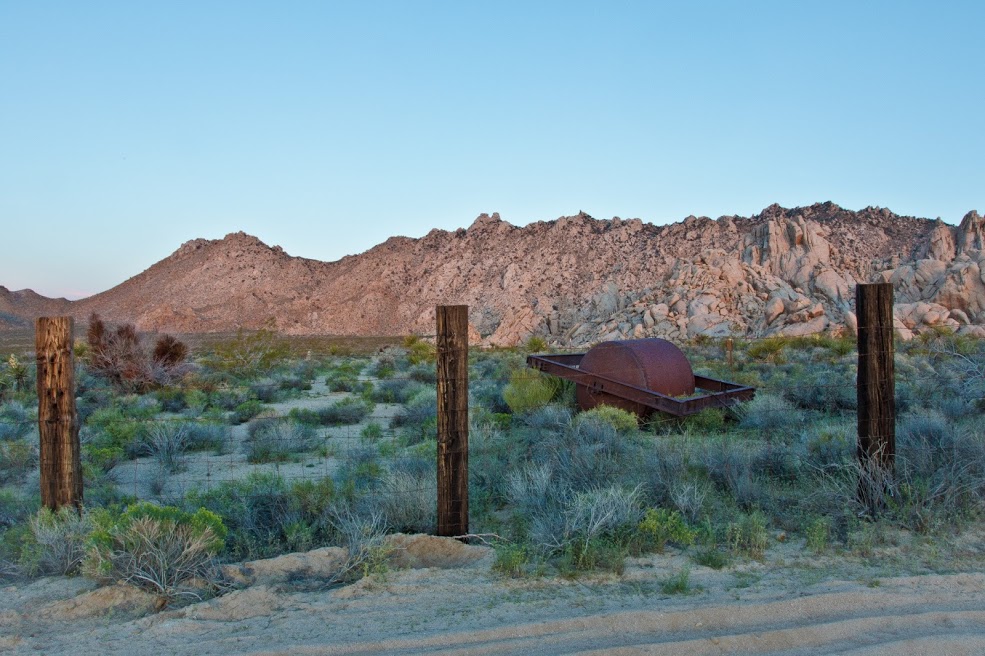 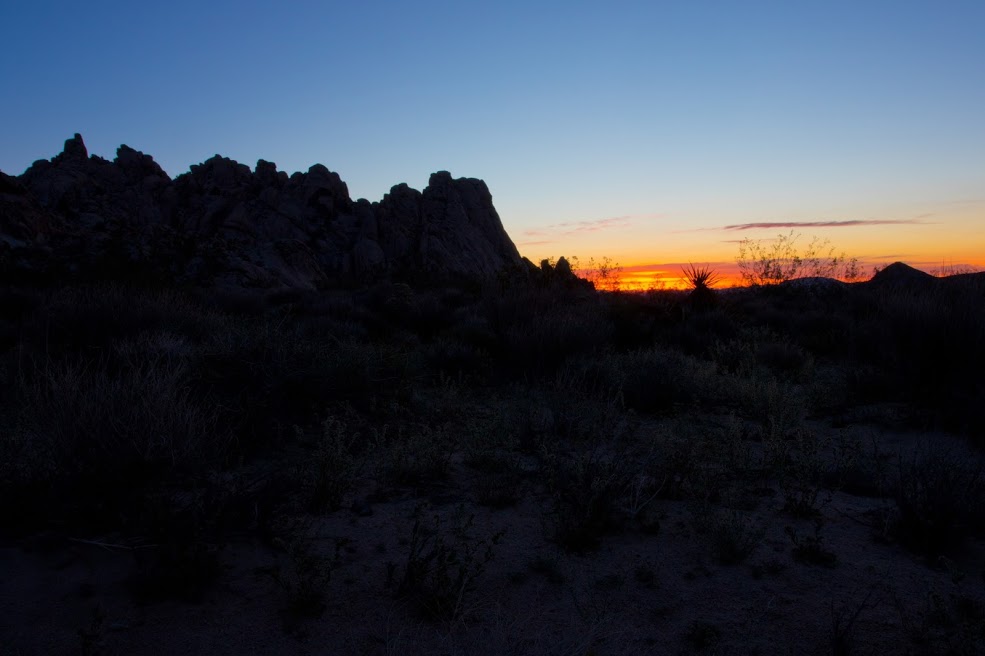 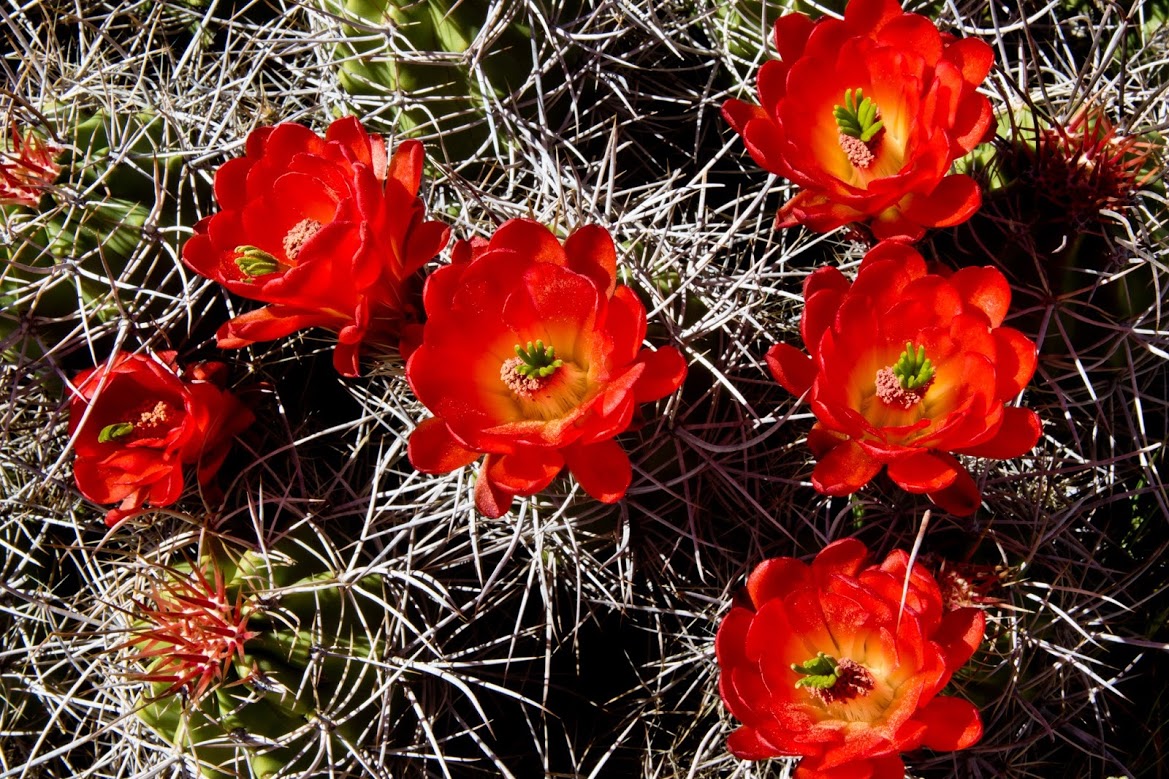 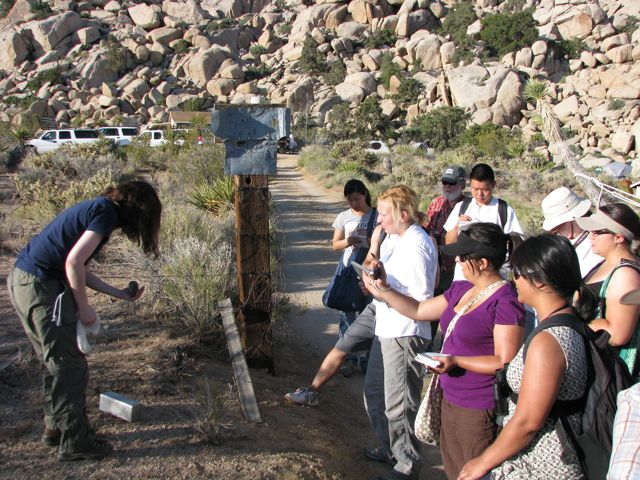 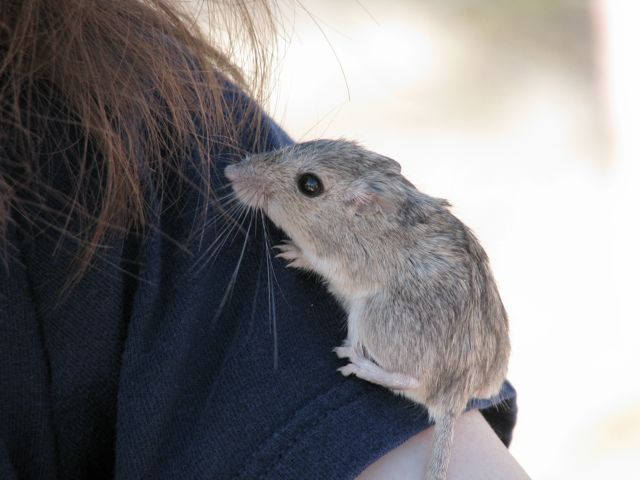 We were lucky to have filmakers Kennan and Karen Ward stay in Granite Cove for a few days in May while they were trying to capture images and video clips of the plants and animals of the Mojave Desert. They were able to capture a Phainopepla (Phainopepla nitens) feeding her young and removing excrement from their nest in these interesting videos, as well as a Blue-gray Gnatcatcher (Polioptila caerulea) incubating her eggs.

We added two bird species to our list this season, thanks to Breck Tyler’s acute observations. One of the species was the Eurasian Collared Dove (Streptopelia decaocto), a non-native species that has been spreading across the country.  The other sighting was of a Peregrine Falcon (Falco peregrinus), a much more exciting find. Breck was here teaching the University of California Santa Cruz Field Quarter with Steve Gliessman.

In November 2009, Assistant Director Tasha La Doux spotted an Acorn Woodpecker (Melanerpes formicivorus) in Granite Cove; this species had never been recorded in the Granite Mountains. In addition, she saw a Painted Redstart (Myioborus pictus) in April 2010, which is a rare sighting for this area.

Brian Kot, a researcher from UCLA, gave us a video clip of a Bobcat (Felis rufus) hauling away its dinner (Jackrabbit) along Kelbaker Road in Mojave National Preserve. However, the real reason Brian was out with his video camera at this time of night was to a woodrat climbing a shrub. He is interested in the locomotion of these desert animals and how they use the vegetation around them. Brian also gave us these nice photos of a Rosy Boa (Charina trivirgata) that he saw around midnight at Norris Camp.

Bee researcher Laurelin Evanhoe, from Cornell University, spotted a Mountain Lion (Felis concolor) in Granite Cove around 11pm on April 11th, 2007. This is a very rare sighting and an exciting one at that!

In June of 2005 the Mojave National Preserve witnessed a 70,000 acre burn, called the Hackberry Complex Fires.  As a direct result of this fire there was a phenomenal bloom all throughout the burn area despite the lack of rain.  During March – May of 2006, the landscape was filled with purple, yellow, white, and orange due to the native species in bloom.  Species such as, Verbeena goodingii, Sphaeralcea ambigua, Phacelia campunalaria, Gilia stellata, Senecio multilobatus, and Chaetopappus ericoides, came up in abundance. In addition, all but a few of the perennial shrubs were seen resprouting, including, Opuntia triglochidiatus, Ephedra nevadensis, Prunus fasciculatus, Yucca schidigera, Robinia neomexicana, and many more. What is even more amazing is that a similar bloom was seen this year in March, April, and May on even less rain.  The bloom was not quite as showy this year, as the predominant species were smaller in stature; for example, Cryptantha gracilis, Eriastrum eremicum, Gilia clokeyi, and Phacelia freemontii, were all carpeting the washes and slopes. Again, the perennial shrubs were seen with new growth coming as a resprouts from the base or in some cases from the tips of the plant (e.g. Yucca brevifolia).

The spring of 2006 proved to be an exceptional year for rare birds visiting the Granite Mountains, with several new species documented for the range. Highlights included several eastern US species, including a Northern Parula, an Indigo Bunting, and a Rose-breasted Grosbeak. There were also a number of unusual sightings for the range, including a Yellow-headed Blackbird (Granite Cove), Osprey (Yucca Bajada), and Belted Kingfisher (Norris Cabin) this spring. Equally impressive were the numerous Black-Headed Grosbeaks in Granite Cove throughout May, and the waves of Hummingbirds (Anna’s, Costa’s, Black-chinned, Rufous, Calliope, and Broad-tailed) that visited the blooming Bladderpod (Isomeris arborea), Spiny Senna (Senna armata), and Desert Willow (Chilopsis linearis) throughout Granite Cove.