The mission of the Sweeney Granite Mountains Desert Research Center is to contribute to the understanding and wise management of the Earth and its arid environments by supporting university-level research, teaching, and public service within the Center’s protected lands and throughout the California Deserts.

Establishment and Growth of the GMDRC*

The Granite Mountains played a significant historical role in the development of the UC Natural Reserve System itself. Use of the Granite Mountains in the 1960s by UC professors such as Ken Norris (UCLA) and Wilbur Mayhew (UCR) as a location for bringing their field courses helped prompt an idea that eventually led to the creation of the Natural Land and Water Reserve System (NLWRS, as the Natural Reserve System was then known) in 1965. Joined by Ken’s brother Bob Norris, their enthusiasm for the Granites, support of the NRS mission, dogged persistence and land acquisition diplomacy, eventually led to the establishment of the Granite Mountains Desert Research Center (GMDRC) in 1978. The early efforts to create the reserve are chronicled by NRS Director Emeritus Roger Samuelson in Ken Norris’s oral history (Jarrell, 1999).

In October 1974, Ken Norris wrote a formal NLWRS report “to provide supporting data for the establishment of a major educational and research site for the study of the central Mojave Desert” (Norris, 1974). In the preamble to the report, he described the interest of the University of California NLWRS in the Granite Mountains:

This range of mountains has unusual diversity of elevation, ranging from about 2,200 feet at the Kelso Dunes to a highest peak at 6,738 feet. All exposures – north, east, south, and west – are found on the small mountain system, and with them the normal exposure –related variations in plants, animals and geological processes. It has unusual biotic diversity, ranging from low Mojave Desert flora and fauna to remnant Colorado Plateau biota on the highest peaks. It is relatively untouched. It also shows geological diversity: towering granite peaks, complex metamorphic deposits, remarkably well developed pediments, alluvial fans, and associated sand dunes that are the finest on the Mojave Desert. Accessible only from the east, except by long and tortuous sandy roadways, it is possible to provide protection with minimum effort and cost.

It has already been well studied. A Granite Mountains flora has been written as has a complete vertebrate survey of the adjacent Providence Mountains. This latter survey actually includes much material from the Granite Mountains and is wholly applicable to them, because the Granites are merely a western extension of the Clark Mountains-New York Mountains-Midhills-Providence Mountains chain. Many hundreds of days have been spent by scientists in the area, and a sheaf of publications has resulted including studies of the dunes, of the indigenous sidewinder, the weather, the dune evolution, the remarkable ecological processes amongst the desert birds, and many other works.

All in all, it represents a remarkably fine potential natural laboratory that could sustain research and teaching on Mojave Desert processes into the indefinite future. For these purposes, generations of scientists and students from many other parts of the world will come to work there.

This Norris report led ultimately to the approval by the University of California Regents of an Item for Action, entitled “Acquisition of Granite Mountains, Natural Land and Water Reserves System” at the January 19, 1978, meeting of the Board of Regents. A new reserve was thereby created.

Every reserve is unique in its capabilities and what is emphasized in its mission. What the Granites offers to visiting researchers and classes, as much perhaps as any field station in the Western U.S., is a tremendous natural area; pristine, wild and expansive. The 9000-acre GMDRC is located within a region of unparalleled biological and geological diversity in California. And while the facilities and staff there are vital to its operation, it really is the quality of this natural area that represents the single greatest asset of the field station. Embedded within millions of acres of federal wilderness, ecological processes are still functioning here. And the GMDRC provides not only a quality setting to researchers, but a site that will be protected over the long term. For visiting students, the Granite Mountains and surrounding region represents not only an outdoor classroom but an adventure into a frontier. Here visiting students can make observations that contribute significantly to our knowledge base, inspiring discovery and appreciation for the complexity of our natural world. 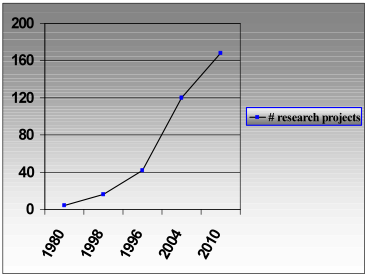 The tremendous growth in research use at the GMDRC over the first 25 years can be attributed to many factors. Certainly, the facilities offer lodging and laboratory space that reduce many of the logistical obstacles of working in a remote area. Onsite weather data, GIS databases, species lists and other data maintained by the GMDRC are invaluable to researchers. Collaboration with agencies and other institutions has lead to the development of research opportunities that would otherwise not have been possible. The organization of workshops and symposiums promotes the GMDRC while galvanizing interest in theme-based research. The protected lands at the GMDRC are in fact the only lands protected for research in the 25 million-acre Mojave Desert. This attribute alone has attracted numerous sensitive and long-term studies to the GMDRC. Staff expertise and support has always drawn research to the GMDRC. For example, many researchers would not have been successful in their studies if not for the expertise and support of past GMDRC staff such as Bruce Bannerman, Dick and Teresa Norris, Philippe Cohen, Cindy Stead, Claudia Luke, Jason Sexton, Jan Goerrissen and Megan Lulow. Today our staff understands this important role more than ever before.

All of the above factors have helped facilitate the growth of research over the first 25 years at the GMDRC. But the single most important factor that stands out more than any other is the phenomena of building a body of research. Like stepping stones, over time one research project builds on the previous one. For example, a site becomes especially interesting to a plant physiologist after a soil scientist has mapped the age of the surfaces there. Some research is only made possible by the data collected by a prior investigation. This nurturing process takes time to evolve, but after several decades we have begun to cultivate and sustain an active research program at GMDRC because we have a developed body of research.

Another key role of the GMDRC has been to plant an academic seed within a remote part of California. Relative to most of California, the eastern Mojave Desert has been a void for academic study. The GMDRC is rapidly changing all of that – begging the question: is the most effective means to grow research in a remote area to plant a field station there? To demonstrate this important role of facilitating academic research in the region, the GMDRC itself encompasses less than 1/10% of the lands within the Mojave National Preserve, yet 75% of the research in biological and physical sciences within the Mojave National Preserve is directly affiliated with the GMDRC. This is a rich contribution to an area identified in the 1980 Global 2000 Report to the President as one of the “black holes” in North America in terms of research and inventory of biodiversity. The GMDRC has acted as a clearinghouse of information to scientists and managers in the Mojave Desert, which in turn supports collaboration in research and land management. For example, one means of achieving this has been to maintain and distribute a comprehensive bibliography of past and active research in the region. Students, faculty, and state and federal agencies request the bibliography on a regular basis. The bibliography now totals more than 4,000 interdisciplinary references. From this database, we are able to analyze research in the region and break it down by discipline and location.

An important goal of the GMDRC has been to promote science-based decision-making in conservation and land management in the Mojave Desert. One of the best ways of achieving this is to share data and information among scientists and managers through the organization and facilitation of formal conferences, workshops, symposiums or informal gatherings among researchers, the concerned public, and agency personnel. Research at the GMDRC provides land managers and the public with a basis for making informed policy decisions based upon an adequate understanding of the environment. The GMDRC has sponsored and taken the lead in organizing numerous conferences over the past few years, most notably the 2004 Mojave Desert Science Symposium, a 3-day conference held at the University of Redlands, as well as this 25 th Anniversary Symposium, well-attended by the land management agencies.

Perhaps the most significant contribution of the GMDRC over the past 25 years has perhaps yet to be realized, because it lies with the spirit embodied in the 35,000 young students that have visited the Center. U.S. high school students have fallen behind other developed nations in science skills, and yetnumerous national and state reports highlight the field experience as one of the most effective tools in teaching science. A number of instructors, such as Mary Price and Nick Waser from UC Riverside, Glenn Stewart from Cal Poly Pomona, Martin Cody from UCLA, and Steve Gleissman and Breck Tyler from UC Santa Cruz, have brought classes to the GMDRC each of the last 20 years. Having this kind of continuity and availability of land that can be used by instructors year after year to showcase what they wish to teach is a powerful attribute of a field station. However, the GMDRC does more than just provide a place where teachers can teach science, it is a place that inspires students to pursue science. Many claim it was their initial field experience at the Granites that changed the direction of their lives towards a career in science. In fact, the majority of graduate and post-doctoral research projects conducted at the Research Center was initiated by students who had first visited the Granites during class trips as undergraduates.

With increased use and expanding collaborations with agencies, there has been a concurrent demand for additional staff and facilities at the GMDRC. The addition of the Assistant Director position in 2001 has enabled the GMDRC to become more active in providing teaching programs and maintaining active monitoring programs. While class use has not increased as dramatically as research use, we are more involved in teaching programs, leading workshops and training programs for scientists. The GMDRC has continued to expand its biological collections and bibliographic databases. These have received increased use and access by scholars and agency scientists, and have contributed to numerous government and institutional programs, such as the data mining efforts of the National Park Service Inventory and Monitoring Program.

As is always the case, with rapid growth come growing pains. The expansion and remodel of the Al. A. Allanson Laboratory and Researcher Housing Complex has become a high priority due to increases in use. A more secure water source is needed to maintain operations in Granite Cove – requiring funds to install a dependable well. Norris Camp Cabin only sleeps twelve persons and is in need of an addition. All these improvements cannot come about until a more secure financial footing is established. Fortunately, the first installment of the Jack & Marilyn Sweeney Endowment was activated in 2003, as was Al and Sibyl Allanson Endowment in 2004. Both of these generous donations in combination should fulfill up to 40% of the base funding targeted for a long-term sustainable budget at the GMDRC. The needs are still great, but much has been accomplished to date, and the future is indeed promising.

* the above excerpts were derived from the introductory comments of Alex Glazer and James André in the 25th Anniversary Symposium Proceedings of the SGMDRC 1978-2003 A Quarter Century of Research and Teaching (Goerrissen & André, 2005).