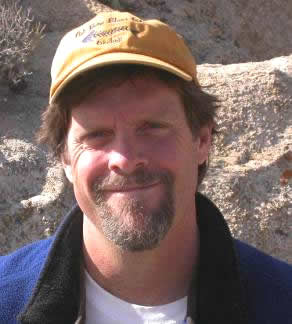 A California native, Jim attended UC Davis, Humboldt State University and UCLA where he studied plant ecology with a focus on the population biology of rare plants. Prior to his arrival at the Granites, his career included stints with The Nature Conservancy, Inyo National Forest and BioSystems Analysis, Inc. where he acquired a broad training in botanical research, conservation biology and natural areas management. Since arriving at the Center, Jim has been very involved with floristic studies throughout the desert southwest, writing Floras of the Mojave National Preserve and Owens Valley. In addition, he has served as a leading organizer of major conferences and interagency science programs, with coordination of academic research and arid lands management as a central theme. Jim has served as Director of the Center since 1994.To contact Jim, e-mail: jim.andre@ucr.edu
————————————————————————————————- 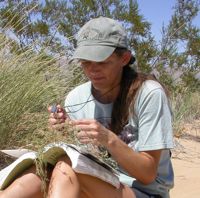 Tasha La Doux attended UC San Diego to receive her B.S. in Ecology, Behavior, & Evolution in 1995, then received a Ph.D. in Botany from Rancho Santa Ana Botanic Garden (Claremont Graduate University) in 2004. She has worked as a botanist in the region since 1998, including federal land management positions such as the Forest Botanist on the Angeles National Forest and as Branch Chief for Vegetation Management at Joshua Tree National Park. Her research interests include plant mating systems, population biology, and floristics; she maintains an active role in public lands management and the conservation of rare plants in the region. She is currently working on a Flora of Joshua Tree National Park. Tasha started working at the Center in 2007.