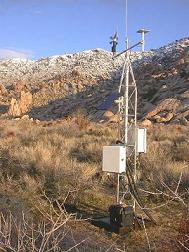 The Center has been collecting temperature and precipitation data in Granite Cove since 1986. A Campbell weather station was installed in 2000, this allowed for additional parameters to be measured including: wind direction and speed, soil moisture and temperature, solar radiation, and relative humidity. In November of 2010 a newer Campbell weather station was installed as part of a collaborative project between the NRS and University of Nevada’s Desert Research Institute (DRI) to establish a network of monitoring stations across California (www.wrcc.dri.edu/ucnrs). In addition to collecting more parameters, the data is available online within the hour it is collected (data is uploaded every 10 minutes). More general information on climate in the Granite Mountains can be found on the natural history page; below we have summarized the precipitation and temperature data since 1986. Raw data can be obtained from the reserve by contacting the Reserve Director or data starting from 2010 can be requested from the Western Regional Climate Center (WRCC) at DRI by visiting the WRCC website.

For a 7-day weather forecast at the Granite Mountains or to view current weather data, you can visit the Granite Mtns WRCC website (we are listed under CA/OR as UCNRS-Sweeney Granite Mtns). See below for a graphic of precipitation and temperature data over the last 7 days.  (To see data from the last 7 days for other parameters, click on “Graph of last 7 days” in the lefthand column on this page.)

Based on these data, precipitation is greatest in February and least in June (Figure 2), however, similar to annual totals, the amount of precipitation in any given month is highly variable. To demonstrate this point, Figure 3 shows the coefficient of variation (the ratio of the standard deviation and the mean x 100) for each month based on data from 1986 – 2006.  With the exception of August, variation in precipitation exceeds the mean for each month.

Precipitation is greatest in Winter (avg = 3.73 in) and least in Spring (avg = 0.69 in) (Table 1). Fall (avg = 2.13 in) can contribute substantially (25%) to the annual totals, although it is the most variable of the four seasons, whereas Summer (avg = 1.86 in) rains are more reliable, contributing 23% of the annual precipitation on average.  If one considers the bimodal distribution of rainfall as falling into only two seasons, i.e. effective “Summer” (June – Sept) and “Winter” (Oct – May) precipitation, the average rainfall for “Summer” is 1.97 in (5.00 cm) and the average rainfall for “Winter” is 6.60 in (16.76 cm) (Figure 4).  Using this bimodal theme, “Summer” precipitation totals are less than average 58% of the years, whereas “Winter” precipitation is under average 54% of the years. 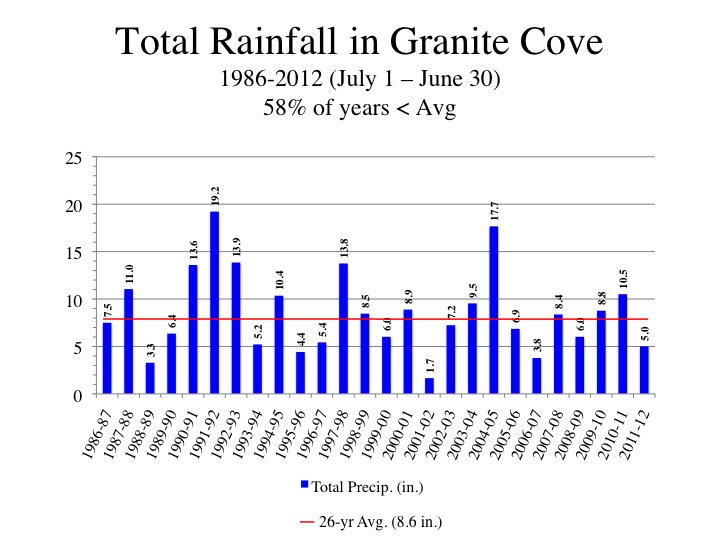 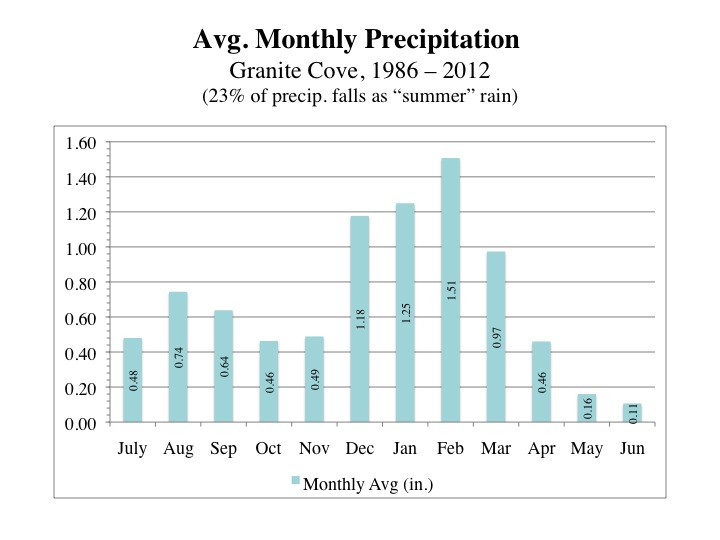 Figure 2. Average monthly precipitation (using the July 1 – June 30 precipitation year) demonstrating the bimodal distribution of precipitation in the eastern Mojave Desert of California. According to these data, effective “summer” (Jun-Sep) rains account for 23% of annual precipitation, February is the wettest month, and June is the driest month. 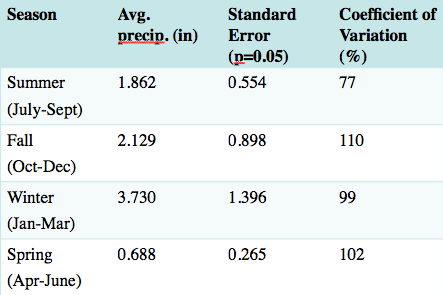 Table 1. Average seasonal precipitation (using the July 1 – June 30 precipitation year) for 1986 – 2012.  Summer rains are the most reliable source of precipitation, although they only account for approximately one-quarter of the average rainfall.  Fall is the most variable season, but can contribute substantially to the total precipitation for the year. 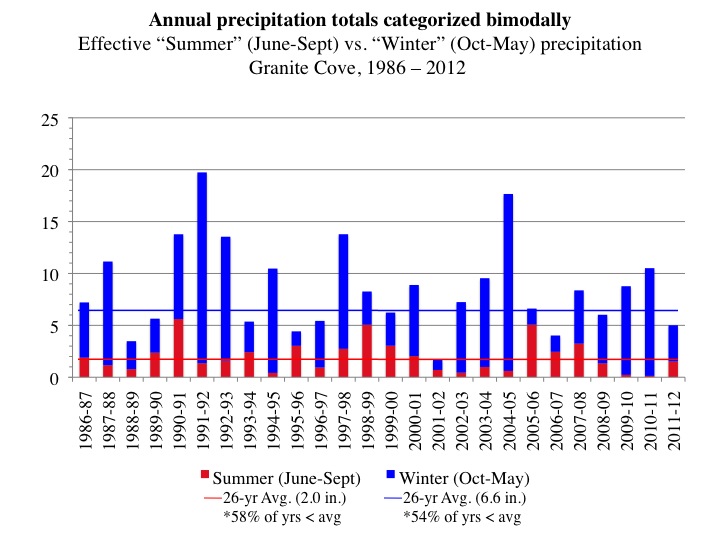 Figure 4.  Bimodal distribution of precipitation in Granite Cove, considering effective precipitation to fall in two seasons: “Summer” (June-Sept) and “Winter” (Oct-May).  “Summer” totals fall under average 58% of the years versus 54% for “Winter” totals.

Figure 5a. Mean monthly temperatures (Maximum, Average, and Minimum) recorded at Granite Cove from July 1986 through June 2006, in Fahrenheit.

Figure 5b. Mean monthly temperatures (Maximum, Average, and Minimum) recorded at Granite Cove from July 1986 through June 2006, in Celsius.